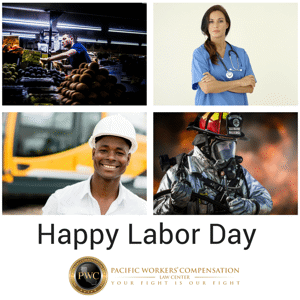 This Labor Day, while you're out grilling and spending time with your family, remember what the holiday is really about: the contributions of workers and the creation of the labor movement. Workers built this country; unions built our middle class. Unions have seen an (undeserved) decline in membership and public reputation in recent years, but they still make a difference in millions of lives. Here are some things that happen when you join a union:

As a Workers' Compensation law firm, we wish all our clients had unions protecting them. If you speak out about dangerous conditions alone, your company can choose to ignore you. If you speak out about dangerous conditions with your union standing behind you, your company has no choice but to hear you and make changes. Just look at the difference between the injury rate at Tesla and the injury rate at a typical UAW plant!

2. You get equal treatment.

You've probably heard about the wage gap. Women and minorities make less money than their white, male counterparts for the same jobs. But did you know that unions help close the gap? The average black worker in the United States makes $17.70/hour, but the average black union worker makes $24 an hour. Unions also provide workers with a place to turn if they experience other types of discrimination or harassment.

Unions don't just negotiate for higher wages -- they also negotiate for benefits such as healthcare, pensions, training, and leave. Do you like your weekend? Are you glad you don't work sixteen hours a day? Those are both things that unions won for you. Unions make sure that companies treat workers like humans -- not cogs in a machine.

4. You join the middle class.

Higher wages aren't the only thing unions negotiate for, but they are certainly nice. Unions are the traditional path to joining the middle class in the United States, and it's no coincidence that declining union membership and a declining middle class have gone hand in hand. You've heard a lot about the disappearance of "good factory job," but remember that they weren't good jobs until the unions got there.

5. You join with fellow workers to make amazing things happen.

There is no end to what human beings can accomplish when they work together. When you join with other workers in a union and stand together to better all of your lives, you become part of a movement that has shaped our country. Together, workers can stand up to the largest corporations in the world and win. Unions improve conditions for the people in them, but also for the people around them. When you join a union, you change the world.

Whether you're a union member, an office worker, or a grocery store clerk, we wish you a safe and happy Labor Day. Pacific Workers' Compensation: YOUR FIGHT IS OUR FIGHT.