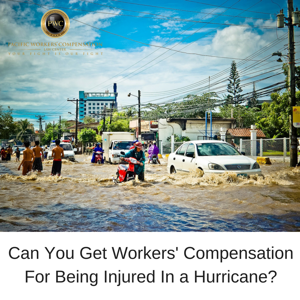 Natural disasters are on everyone's mind. It's understandable, given the devastation in Texas from Hurricane Harvey, the earthquake in Mexico, and the preparations for Hurricane Irma, which has already killed twenty-three people in the Caribbean. Working during a natural disaster is hazardous, but for some professions, it is necessary. Though California is unlikely to ever be hit by a hurricane, we get our share of natural phenomena, from earthquakes to wildfires.  If you are a worker in California who is injured on the job by a natural disaster, you are eligible for Workers' Compensation.

Additionally, Californian heroes, such as firefighters (including our friends at Oakland Fire), aid workers, and healthcare professionals often travel to the sites of natural disasters to help. These workers are covered by California Workers' Compensation if they are injured carrying out their duties, even if the injury occurs out-of-state.