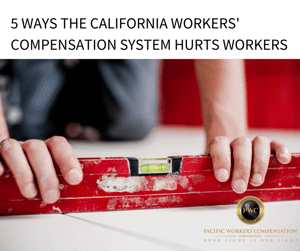 1. Doctors who have never seen a patient have the power to deny treatments.

The Utilization Review process -- in theory, meant to prevent workers' compensation fraud -- means that doctors who work for insurance companies decide whether a patient's treatment will be accepted or denied. Setting aside the obvious conflict of interest , there is another major problem: these doctors have never even met their patients. Instead, UR doctors "make their decision based on a partial review of the injured worker’s medical history."

Without treatment, injured workers can't get better. The drawn-out process of denials means that workers and their advocates spend months fighting for treatments they need to get back to work. Instead of recovering and providing for their families, workers are stuck waiting. There are no penalties for the insurance companies that do this.

Insurance companies accept medications and treatments one month, and deny them the next. A worker injured in the San Bernardino terrorist attack -- whose survivors rely on workers' compensation for treatment -- had physical therapy "stopped, restarted and stopped again." A CHP officer who was injured in a collision with a drunk driver had a procedure that successfully treated his pain without heavy pain-killers. The second time his pain management doctor requested it, the treatment was denied.

Insurance companies do everything they can to make workers look like liars, including hiring private detectives to follow injured workers with cameras. Honest, hardworking people are "mischaracterized as scammers trying to make an easy buck off the system."

5. All the data we have about whether it's working comes from insurance companies.

In California Workers' Compensation, there is no transparency. The Department of Industrial Relations doesn't publish data about acceptances and denials. Public reports come from California Workers’ Compensation Institute (CWCI), a private organization. Where do they get their information? It's "voluntarily provided by its members -- insurance providers and some self-insured employers." Their data is not available to the public.