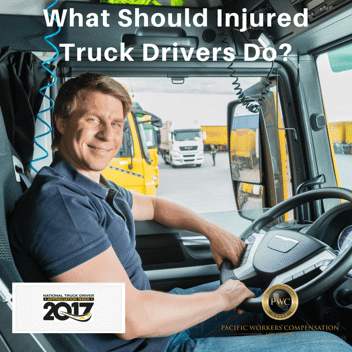 It's National Truck Driver Appreciation Week, an opportunity for us all to recognize the hard, important work that truck drivers do across the United States. You probably know that Pacific Workers' Compensation is an Oakland company -- we are very vocal about that. However, you might not be aware that we are located right next to the Port of Oakland, one of the ten busiest ports in the country. As such, we see a lot of truck driver Workers' Compensation cases.

Truck drivers are crucial to the operation of pretty much every single business in the country, and they work very hard to keep the roads safe while they get their jobs done. However, some companies take advantage of truckers, forcing them into unfair rent-to-own schemes, making them work up to twenty hours a day, and misclassifying them as independent contractors. This treatment is illegal -- in the more than thousand cases truck drivers have brought before the California Department of Industrial Relations since 2010, truck drivers have won 97% of the time. It is also dangerous -- truck drivers who have been behind the wheel for more than eight hours are twice as likely to crash as those who have been driving for a shorter period of time.

With 500,000 accidents involving large trucks in the United States annually, making sure that trucking companies respect laws and regulations that exist for the safety of drivers and the public at large is crucial. It's also paramount that truck drivers have good representation when they are injured in accidents that are caused, in large part, by the negligence and labor violations of trucking companies. Workers' Compensation cases involving misclassification and abusive employers are especially complicated. Truck driver Workers' Compensation cases require expert attorneys that know how to handle those issues.