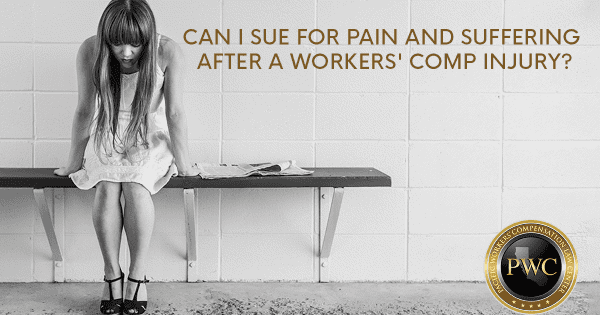 It used to be very common for injured workers to allege Permanent Disability (PD) occurring from depression, stress, anxiety, etc. after suffering a physical injury. However, legislation was passed several years ago reforming the law and limiting the monetary compensation awarded in such instances. For injuries occurring after 1/1/2013, an injured worker can no longer receive an increase in PD due to psychological distress, loss of sleep, or sexual dysfunction secondary to a physical injury, unless the injury is catastrophic or the individual was a victim of a violent act or was exposed to a violent act. To some extent, this put an end to recovery for “pain and suffering” in many workers’ compensation cases. Notwithstanding, you may still be entitled to medical treatment and TTD, or TPD benefits. You should consult with an experienced attorney to determine whether you have a case for “pain and suffering," particularly if you've been a victim of workplace violence.